The League of Oregon Cities is a governmental entity formed by an intergovernmental agreement by Oregon’s incorporated cities.

The group adopted a legislative program that called for submission of a constitutional amendment that would guarantee cities in Oregon full control of their own affairs and restricting legislative interference with the home rule prerogatives of other cities.

Today, the League brings city officials together from around the state and the result is a unified, powerful and influential force.

The Central Jackson County Fire Protection District is committed to the preservation and protection of life and property, fully dedicated to the communities we serve

With dedication and commitment to excellence, our organization believes human resources are the most important ingredient required to carry out our mission. Furthermore, we believe everyone should be treated with:

All in an effort to foster pride and ownership.

Gahanna was founded along the Big Walnut Creek in 1849 by John Clark of Ross County from 800 acres of land that his father, Joseph Clark, had purchased from Governor Worthington in 1814. Clark named his property the Gahanna Plantation, from which the City of Gahanna derives its name.

Gahanna maintained a considerable rivalry with the town of Bridgeport. Located directly across Granville Street from Gahanna and also along the banks of the Big Walnut Creek, Bridgeport was founded in 1853 by Jesse Baughman, a former Franklin County Commissioner. The two towns eventually put aside their differences and merged into one.

They adopted the name Gahanna as there was already another town of Bridgeport in Ohio. In March of 1881, 55 citizens of Gahanna petitioned Franklin County to incorporate the village. The incorporation was granted in June and was recorded on August 8th, 1881. The Village then held its first mayoral election and on October 6, 1881, swore in its first mayor, L. John Neiswander. 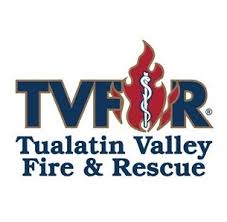 Tualatin Valley Fire & Rescue took shape between 1972 and 2004, as a number of small fire departments consolidated to increase efficiency, lower the cost of services, and eliminate duplication. It’s because of these consolidation and annexation efforts that TVF&R has one of the lowest tax rates in the region.

We recognize that we are accountable to the public we serve and will be good stewards of the finances and resources entrusted to us. We will conduct ourselves in a manner that brings credit to the organization and the fire service while both on and off duty.

While our vision and principles work together to shape what we do, they are only the beginning. Together, we have worked with our Board of Directors, our Division Managers, and all members of TVF&R to define a strategic plan that can still better fulfill our mission “creating safer communities through prevention, preparedness, and effective emergency response.”