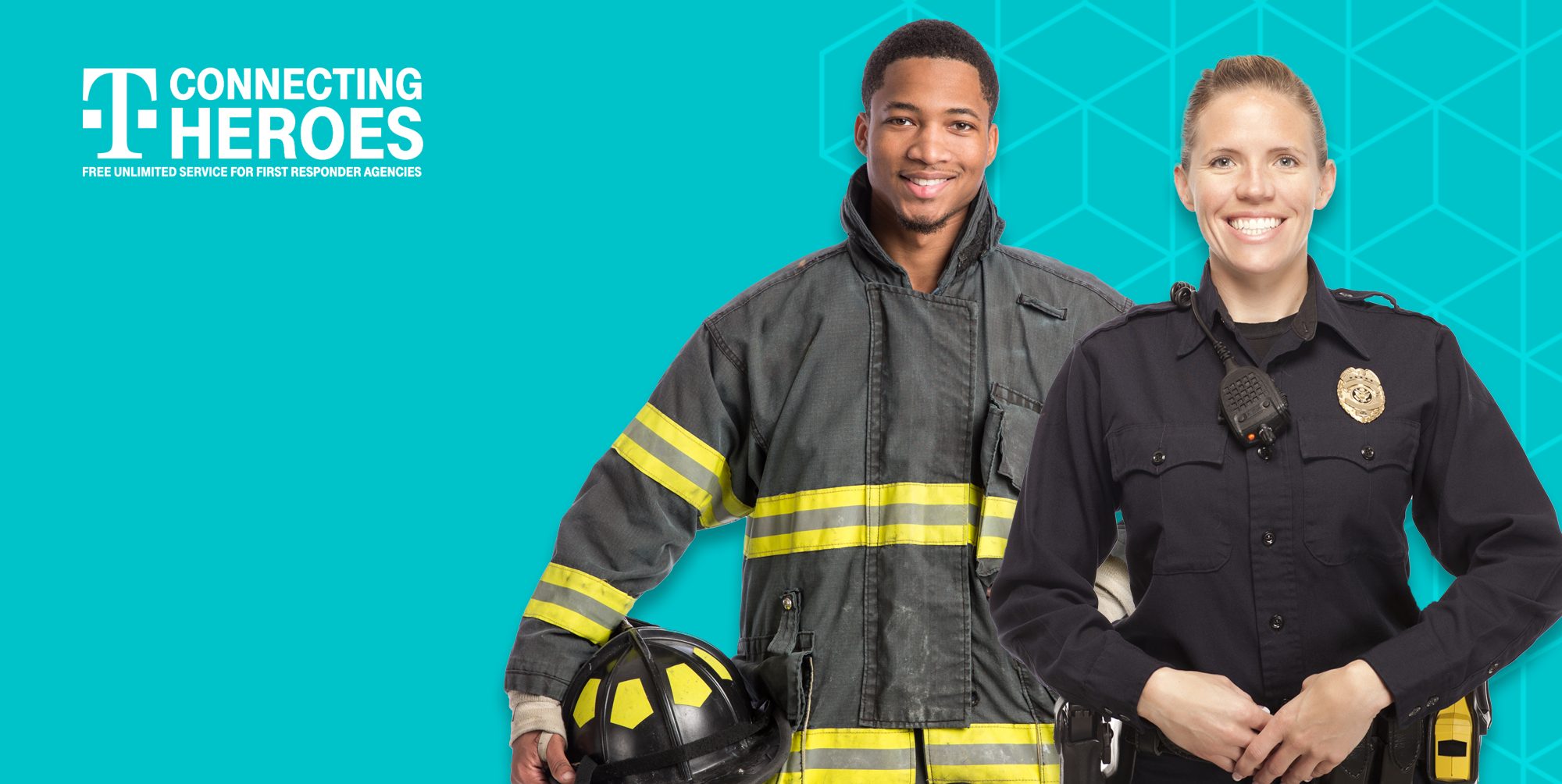 Did you know that T-Mobile offers priority network access and preemption, so that first responders with WPS (Wireless Priority Service) can get unmatched network access in an emergency?*

So not only do first responders get to the front of the line at T-Mobile, but if the network ever becomes crowded in an emergency, non-emergency traffic drops to make way for both voice and data communications by first responders.

At the time of the initial launch, Mike Sievert, CEO of T-Mobile said, “When we’re at our most vulnerable, first responders are there for us … and they are under more pressure today than ever before. Connecting Heroes is one way we’re saying ‘thank you’ in this critical time.” “People who save lives shouldn’t have to choose between life-saving equipment and wireless service. And with Connecting Heroes, they won’t have to. We’re not limiting this program to a few months or a year … first responders can get free service including 5G access, for a full decade. THIS is the kind of impact the new T-Mobile can have in the world. THIS is the kind of difference we can make.”

State and local first responder agencies face tight budgets, year after year. So, they’re forced to make impossible trade-offs between providing them critical life-saving equipment or the communications services needed to do their jobs. Not anymore. Connecting Heroes provides free unlimited talk, text and smartphone data with the highest network priority to every public and non-profit state and local, police, fire and EMS agency. Connecting Heroes is a 10-year commitment that brings up to $7.7 billion back to first responder agencies.

The launch of Connecting Heroes was made possible by T-Mobile’s 5G network and the massive capacity unleashed from a merger with Sprint. T-Mobile’s Nationwide 5G is a game-changer for first responders who need fast speeds, high capacity and low latency. Other networks claim to deliver 5G but mostly rely on 4G LTE or Wi-Fi. As America’s 5G leader, T-Mobile is building the highest capacity 5G network in the country over the next five years with new dedicated spectrum.

Since launching Connecting Heroes as part of #5GforGood, first responder agencies and departments around the country have enjoyed the benefits of free unlimited 5G service.

T-Mobile U.S. Inc. is America’s supercharged Un-carrier, delivering an advanced 4G LTE and transformative nationwide 5G network that will offer reliable connectivity for all. T-Mobile’s customers benefit from its unmatched combination of value and quality, unwavering obsession with offering them the best possible service experience and undisputable drive for disruption that creates competition and innovation in wireless and beyond. Based in Bellevue, Wash., T-Mobile provides services through its subsidiaries and operates its flagship brands, T-Mobile, Metro by T-Mobile and Sprint.

NPPGov membership is free and there is no obligation to purchase. Join NPPGov for free to view a complete list of NPPGov contract documents and instructions for fire, rescue, law enforcement, public procurement, government, education organizations and more.

*Connecting Heroes line eligibility subject to reverification. Coverage not available in some areas and may be impacted by emergencies; check your response area. While 5G access won’t require a certain plan or feature, some uses/services might. On device offers, if you cancel wireless service, remaining balance on required finance agreement (T-Mobile customers) or lease (Sprint customers) becomes due. Allow 2 bill cycles for credits. Rebates via virtual prepaid MasterCard (no cash access; expires in 6 months). See details, Terms and Conditions, and Open Internet information at T-Mobile.com.